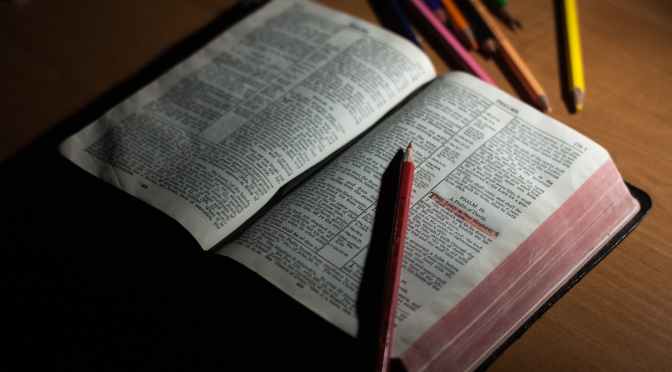 SYNOPSIS – God’s final and complete “word” has been “spoken” in His Son. All previous “words” were partial, preparatory, and incomplete – Hebrews 1:1.

The epistle to the Hebrews compares what God achieved in Jesus to the provisional and partial revelation provided in the Mosaic legislation. The contrast is between the finality of the revelation made in Jesus Christ and the partial and incomplete one found in the old covenant. What was preparatory and provisional has been superseded by a “word” that is complete and final.

For example, the epistle to the Hebrews shows the superiority of the Son’s word, his ministry, his priesthood, and his sacrifice over the services, priesthood, and the sacrifices of the old Levitical system. The epistle does not denigrate the past revelations of Yahweh; however, it stresses how much the new revelation has surpassed all that preceded it; What was incomplete is now made complete in Jesus.

(Hebrews 1:1-3) – “Whereas, in many parts and in many ways of old, God spake unto the fathers in the prophets, At the end of these days, He hath spoken unto us in his Son,—whom he hath appointed heir of all things, through whom also he hath made the ages; Who, being an eradiated brightness of his glory and an exact representation of his very being, also bearing up all things by the utterance of his power, purification of sins having achieved, sat down on the right hand of the majesty in high places.” – (The Emphasized Bible).

The letter was addressed to a Christian congregation near the city of Rome that was experiencing pressure from outsiders. Some members were contemplating a return to local synagogues to avoid persecution – (Hebrews 2:15, 10:25-34, 12:4, 13:24-25).

The epistle begins by presenting its main proposition – The final, full, and superior “Word of God” has been spoken in the “Son” at the start of the “these last days.” This final word marks the commencement of the messianic age, the era of fulfillment.

The Greek sentence begins with two adverbs – polumerōs and polutropōs. Both are compounded with the adjective polus, or “much, many.” Polumerōs combines it with meros – “part.” Polutropōs is combined with tropos – “manner.” Together, they stress different aspects of the past revelation. It was partial (“in many parts”) and given in different “ways.” Presumably, the latter included prophecies, visions, dreams, and other forms of inspired communication. God did speak before but only partially so, here a little, there a little. Three contrasts are presented to demonstrate this:

The past prophetic words were promissory, preparatory, incomplete – They did not reveal fully what God intended. A more complete revelation was needed. As the epistle argues, the old system failed to achieve the “purification of sins.”

The past “word” was correct but partial. However, the ultimate “word” is expressed in a Son. The term “last days” provides the time key for this final “word” – It began with the Death and Resurrection of Jesus. His exaltation to God’s right hand ushered in the time of fulfillment – (Compare – Acts 2:17, Galatians 4:4, Ephesians 1:10).

In the Greek sentence, there is no definite article or “the” before the word “son.” Omitting the article lays stress on the class or status of a “son,” not on his individual identity. The “word” that God now speaks is by means of one who is a son, in contrast to the prophets, priests, and angels of the past.

A son is in the closest relationship to a father and that closeness emphasizes the elevated status of Jesus. The “Son” is superior even to Moses; consequently, the “word” spoken in him is vastly superior to all others, period. His word is not just one among many other inspired words, but instead, one with absolute and final authority.

The “Son” in whom God now speaks is the same one that He “appointed heir of all things,” an allusion to Psalm 2:8-10. Yahweh promised to give the Son “the nations as an inheritance.” But the epistle now expands that original promise to make the Son the “heir of all things” – (In Hebrews 2:5-10, the Son is to inherit the “coming world”).

This son is the eradiated brightness of the glory and the exact-impress of His very essence. Not only does he hold an elevated position, but he reflects the very glory of God.

This is not abstract or metaphysical speculation about the nature of Christ, but instead, it points to the surpassing greatness of the position he now holds because of his obedient death – (“Having achieved purification of sins, he was appointed heir”).

The reference to the “purification of sins” anticipates the epistle’s discussions about the superior priesthood of Jesus and the permanent results of his sacrifice. As a result, the Son “sat down on the right hand of majesty.”

Under the Levitical system, the high priest entered the sanctuary only on the annual Day of Atonement and he never “sat down” or remained within it. In contrast, Jesus entered the true sanctuary “once for all” and “sat down,” where he now remains. This description emphasizes the completeness of his priestly act and his exaltation to reign. And there he remains until God again “introduces the first-begotten into the habitable earth.”

The “word” spoken in the Son is superior to all past revelations in two ways. First, it is the last and final word in a long series of revelations. Second, the Son himself is the consummation of these past and partial revelations – “The perfecter of our faith.” The goal of the epistle is to exhort believers to hold fast to the vastly superior “word” they now have in Jesus. This full and final “word” surpasses all past revelations, whether disclosed by prophets, priests, angels, or even Moses.

Only in His Son is the final revelation of Yahweh found, not in the regulations of the Torah, animal sacrifices, circumcision, the phases of the moon, or the observation of holy days. The Son came to fulfill what such things foreshadowed, not to renew them.

What preceded the “word spoken in a Son” was preparatory and promissory, not final. As Paul put it, the old system constituted the “shadow” of the substance that is now found in Christ Jesus.

This is the choice Christians must face when they contemplate dialing back Christianity into one form of Judaism or another. Pouring new wine into old wineskins will never produce the desired results. Why chase after shadows when the substance that once cast them now stands in their midst?