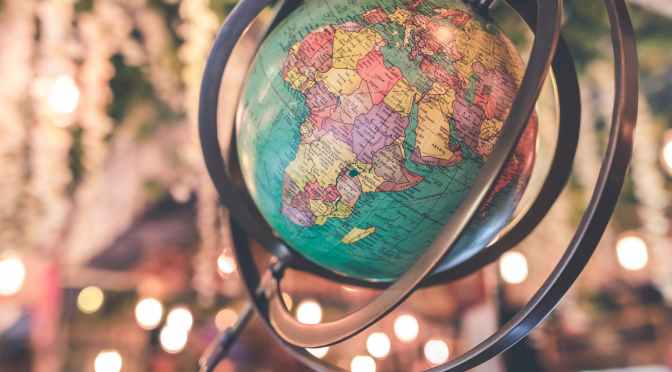 According to Paul, the land promised to Abraham envisioned the inclusion of the entire world – Romans 4:13.

God began to redeem humanity with His covenant with Abraham, beginning with the summons for him to leave his homeland for the “land that I will show you.” Yahweh would make him into a “great nation,” and in the Patriarch, He would “bless all the clans of the earth.” And from the start, the land promise was central to the covenant.

In his letter to the Romans, Paul presented Abraham as the great exemplar of faith, the model for all men who would live from faith, as well as the “heir of the world.” In the Kingdom of God, the original and limited “land promise” finds its fulfillment in the New Creation. Thus, the Patriarch and all who belong to him inherit the “world”:

God declared Abraham “right” and reckoned his faith as “righteousness” while he was still uncircumcised, and thus apart from the “works of the Law.” Consequently, he became the “father” of every man who is “from faith,” circumcised or not, whether Jew or Gentile. All who are from that same faith are of the “seed of Abraham.”

References to the “promise” and “heir” point to future realities. For Abraham and his “seed,” the promised inheritance is the entire “world” or kosmos, and NOT the limited territory of Canaan. Not always noticed is how Paul has universalized the original promise of land to include the entire “world.”

This promise was to Abraham and to “his seed,” the group composed of all who walk in the same faith that he did. The promised inheritance is through faith and grace, and therefore, the “promise is firm to all the seed.” Yahweh appointed Abraham to be the “Father of many nations” and not just of Israel.

Abraham believed in the word of God who “raises the dead and calls the things that are not into being.”  Paul applied this to Abraham’s belief that God would grant him the promised “seed” – Isaac – even though Sarah’s womb was “dead.” But the story of Abraham’s justification was not “written for his sake alone”:

“But also, for our sake also to whom it is to be reckoned, even to them that believe upon Him who raised Jesus our Lord from among the dead, who was delivered up on account of our offenses and was raised on account of the declaring us righteous” – (Romans 4:23-25).

Thus, Paul saw the fulfillment of the original promise to Abraham of territory in the gathering of men and women from every nation through the proclamation of the gospel. And this process will culminate in the resurrection of the dead and the New Creation. In short, the covenant of Abraham finds its fulfillment in Jesus Christ and the gospel proclaimed by him and his apostles.

3 thoughts on “HEIR OF THE WORLD”