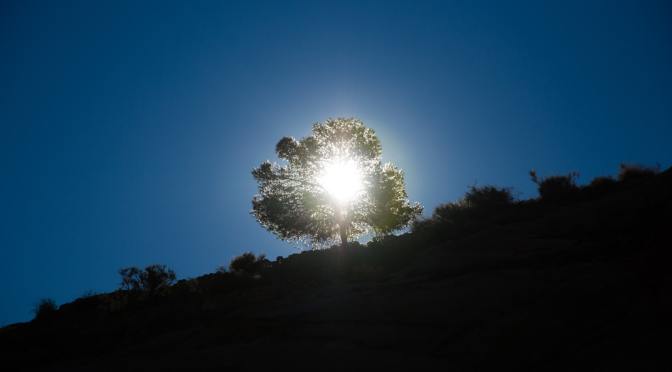 The Transfiguration was the confirmation of his status as the Messiah, and of the necessity for Jesus to suffer before receiving glory – Mark 9:2-13.

In Mark, the event known as the “Transfiguration” begins with the clause, “after six days.” This is not just a temporal reference, but also a link to the preceding story in which Peter acknowledged Jesus as the Messiah. In response, he explained the true meaning of discipleship. To follow him, a man must “deny himself and take up his cross” just as the “Son of Man” did.

At the end of the preceding paragraph, Jesus promised that “certain of those standing here shall in nowise taste of death until they see the kingdom of God having come in power.” That time had arrived:

In Matthew’s version, what the disciples saw is called “a vision.” In Luke, Jesus took the disciples apart to the mountain where he was “transformed” as he prayed. In all three accounts, the same three disciples were with him, Peter, John, and James – (Matthew 17:9, Luke 9:28-32).

“After six days.” The Transfiguration echoes the day when Moses ascended Mount Sinai to receive the two tablets of stone. Just as Israel was commanded to hearken to the Law given through Moses, so the disciples were admonished by the Divine voice to “hearken” to the “Son of God” – (Exodus 24:12, 15-18).

The description of the cloud “overshadowing them” also alludes to the story of Moses on Sinai. “Overshadow” translates the Greek verb episkiazō, which is the same term used in the Greek Septuagint version of Exodus:

The Exodus allusion is strengthened by Peter’s offer to build three “tabernacles” (Greek, skéné), using the same Greek noun for “tabernacle” employed in the Septuagint translation of Exodus. Under the Mosaic covenant, the glory of Yahweh filled the “Tabernacle” in the wilderness. Now, the glory of God “tabernacles” in Jesus, and not in any tent made-by-hand.

The heavenly voice called him “my Son.” God confirmed the previous confession by Peter and acknowledged the messianic status of Jesus. The Transfiguration took place on a “high mountain.” The identity of the mountain remains uncertain, but its location is not relevant to the story.

The Greek word translated “transformed” is metamorphoō, meaning “to transform, transfigure; to change in appearance.” The verb is in the passive voice. That means Jesus did not change himself, but that someone or something “transformed” him. The ordinary garments that he wore were also changed, becoming “brilliant, exceedingly white.”

In Malachi, Yahweh promised that Elijah would return before the end. Moses is mentioned in the same passage, and this explains why Moses and Elijah appeared together with Jesus on the mountain – (Malachi 4:4-6).

The order of the two names is unusual. While Elijah was held in high regard, in the Hebrew Bible, Moses is always presented as the foremost prophet, second only to Abraham in honor and esteem. Moreover, here, Moses is said to be “with” Elijah, implying his supporting role to him. Previously, certain men asked whether Jesus was Elijah. But following the Transfiguration, Jesus affirmed that Elijah had come already. The promise of “Elijah who was to come” was fulfilled in John the Baptist – (Mark 8:27-30).

“This is my beloved Son; be hearkening to him!” Jesus was the one the disciples must heed above all others, exactly what Yahweh commanded Israel to do when he raised up from among them the “prophet like Moses” – (Deuteronomy 18:15).

The cloud “overshadowed them.” The pronoun “them” refers to Jesus, Elijah, and Moses, not to the three disciples. The cloud did not also overshadow the disciples. Instead, the heavenly voice spoke to them “out of the cloud.” And the spoken words of God echo the words from heaven heard at the baptism of Jesus, as well as the promises from Deuteronomy 18:15 and Psalm 2:7 – (“This is my Son, the Beloved, be hearkening unto him”):

The Transfiguration ended as suddenly as it began. Only Jesus was left standing. The purpose was to place the endorsement of God on his ministry and words and to confirm him as the “Son of Man” and the “suffering servant” of Isaiah destined to die for his people.

As they departed from the mountain, Jesus commanded the disciples to tell no one what they had seen until after he rose from the dead. Then, they “seized this saying to themselves, disputing what was the rising from among the dead,” indicating their continuing confusion about the identity and mission of Jesus. In their minds, the coming of Elijah in the ministry of John ruled out the need for Jesus to die, let alone “to rise from the dead.”

The command to silence is another link to the preceding story. After Peter confessed that Jesus was the Christ, he charged his disciples to tell no one.  And on the mount, they saw a vision of the glory that Jesus would receive after he was resurrected.