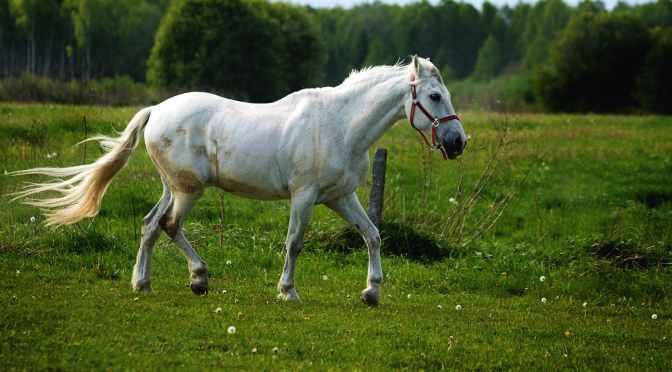 The Lamb opened the first seal, releasing a rider with a “bow” seated on a white horse, setting out to “conquer” – Revelation 6:1-2.

Immediately after his enthronement, the “Lamb” began to open the “seven seals,” starting with the first four. His right to open the scroll is based on his sacrificial death. The Book of Revelation portrays events and processes put into motion by the Death, Resurrection, and Enthronement of Jesus, the “faithful witness, the firstborn of the dead, and the ruler of the kings of the earth.”

The opening of the “seven seals” does NOT reveal the contents of the “sealed scroll.” It is the preliminary act required before the scroll can be opened. Quite possibly, what is presented with the breaking of the seals is the outline of the scroll’s contents, a “preface” to the document itself.  The scroll is not fully “opened” until chapter 10 – (Revelation 10:1-11).

Each “rider” is authorized by the “Lamb” to execute his assigned task – (“it was given to him…”). The “Lamb” himself opens the first four seals, and each “rider” is commanded to perform his mission by one of the “four living creatures,” who were linked previously to the “throne” on which the “Lamb” now reigns – (Revelation 4:6-10, 5:7-10).

The order of the four “riders” does not indicate chronological sequence. The contents of all four seals are unleashed simultaneously, which is indicated by the summary statement in verse 8. Collectively, they kill a “fourth of the earth.”

The first “rider” sits on a “white horse.” He rode out “conquering, and to conquer.” Apparently, the “bow” symbolizes conflict.

The figure rode a “white horse.” One suggestion is that he represents Jesus, who conquered his enemies. That idea is strengthened by the later image of the heavenly “Rider on a White Horse” who defeated the forces of the “beast” – (Revelation 19:11-21).

However, other than riding on a white horse, the two figures have nothing in common. The first rider was given a “victory wreath” or stephanos. In contrast, the heavenly “Rider on a White Horse” was wearing many “crowns” or diadems. The first rider carried a “bow,” but Jesus wields a “double-edged sword.” Moreover, all four riders are commanded by the “Lamb,” but the heavenly rider is the “Lamb.”

Verse 8 summarizes the effects of all four riders – death, famine, bloodshed, pestilence. Nothing positive results from any of them. Since the first rider is a member of this group, he cannot be the “Lamb,” the church, or the proclamation of the gospel.

More probably, the “first rider” represents a counterfeit Christ; that is, deceivers who subvert the faith of the saints and claim to speak for Christ, the true “Lamb.” This would include groups such as the “false apostles” and “Nicolaitans” described in the letters to the “seven churches” – (Revelation 2:2-6, 2:14-15, 2:20-21, 13:11-17).

The verb rendered “conquer” or “overcome” is nikaô, the same verb applied to the “Lamb,” to persevering saints, and to the “beast” who “overcomes the saints.” Regarding the latter, the “beast” overcomes believers by killing them – (Revelation 11:7, 13:7-10).

The first rider went out “conquering and that he should conquer.”  The verb has no object; precisely what or who is conquered is not stated.

The church at Ephesus was commended for rejecting the works of the ‘Nicolaitans,’ a compound of niké, “conquer,” and laos, “people.” It has the sense of “conquest of people.” It is related to the Greek verb used for the “conquering” by the “rider on the white horse” or nikaô. The “deeds of the Nicolaitans” refer to attempts to infiltrate false teachings into the church, and thereby, conquering the saints through deception.

The figure with a bow may have the god Apollo in view (Apollōn).  In Greek mythology, he was an oracular deity linked with prophecy. His image carried a bow and arrow, and he was the patron deity of archers. He was worshipped in the province of Asia and was considered the twin brother of the goddess Artemis (also called Diana of Ephesus).

Due to the similarity in spelling, the name ‘Apollo’ was associated with the verb apollumi, meaning “to destroy.” Later, the “king the angel of the Abyss” is called Apolluōn, a spelling almost identical to Apollōn, and a cognate of apollumi or “destroyer.” In the Latin language, Apollo was Articenens, the “bow-carrier.” All this suggests a link between the first rider and the god Apollo – (Revelation 9:11).

Most likely, the first rider symbolized deceivers within the church who “conquered” by deception. They were forerunners of the final onslaught by the “beast,” the “False Prophet,” and “Babylon.” The “beasts of the earth” mentioned in verse 8 reinforce this interpretation.

“White” represents purity and righteousness, the “righteous deeds of the saints.” That this figure is riding a “white horse” and wearing a victory wreath means he mimics the “Lamb.” He represents deceivers who work to “conquer” the saints, including the false teachers already active in the “seven churches.”

Deceivers prepare the way for the final onslaught against the “saints” by the “beast,” the culmination of a centuries-long effort to destroy the church through deception and false teachers – (Revelation 2:2–6, 2:14-15, 2:20-24).