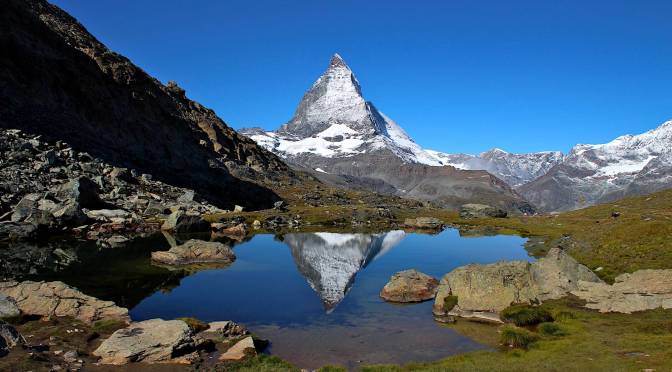 Previously, John saw the 144,000 “males” from the tribes of Israel encamped in the wilderness. Now, they appear together on “Mount Zion,” a priestly company and the “first fruits” of the greater harvest to come. They stand with the “Lamb” in contrast to the “inhabitants of the earth,” who bowed and rendered homage to the “beast.”

The 144,000 “males” have God’s name “written on their foreheads,” while the “inhabitants of the earth” have their foreheads “branded” with the “mark of the beast.” The “name of the Father” is the equivalent of the “seal of God” that was placed on the “servants of God” in chapter 7. And to the church at Philadelphia, Jesus promised to write the “name of his God” on the forehead of every believer who “overcame” – (Revelation 3:10-12, 7:1-8).

Previously, the “Dragon” was standing on the “seashore” to summon his “seed” to attack the “seed of the woman” – The beasts from the sea and the earth. Now, John sees the “Lamb” standing on “Zion.” To ask whether this refers to “heavenly” Zion is to miss the point of the contrast. The “inhabitants of the earth” prostrate themselves before the “beast,” but the followers of the “Lamb” stand with him on “Zion,” and in Ancient Jerusalem, Zion was the hill on which sat the Temple and its sanctuary.

Revelation continues to build its portrait of the “Lamb” using the second Psalm. In it, the Messiah appointed by Yahweh is reigning already from “Mount Zion.” The present passage details how his followers overcame to reign with the “Lamb” over the nations. In the preceding visions, Satan attempted to destroy the messianic “son” and his people, the “seed of the woman.” God responded by providing victory through His anointed one, Jesus.

The number ‘144,000’ is symbolic, a multiple of 12, the number elsewhere associated with the people of God. But the symbolism is fluid. In chapter 7, the 12,000 “males” from Israel became the “innumerable multitude” of men and women redeemed from “every tribe and nation.” In the present passage, the stress falls on the company that has been “purchased from the earth” as the “first-fruits” of the harvest to come – (Revelation 7:1-17, 21:12-21).

The “voice of many waters” provides a verbal link to the opening vision of one “like a son of man” who was walking among the seven churches – “And his feet like burnished brass, as if it had been refined in a furnace, and his voice as the voice of many waters.” That same Jesus now stands with his saints on “Zion” – (Revelation 1:15).

The men “singing a new song” and “harping their harps” echo the words heard in the vision of the Throne. In anticipation of the Lamb’s victory, the “twenty-four elders” and “four living creatures” played their harps and “sang a new song” in praise of the one who “purchased men from every nation,” making them a “kingdom of priests.” That has become reality on “Mount Zion,” and only the men who were redeemed by the “Lamb” understand the “new song” – (Revelation 5:8-10, Exodus 19:5-6).

The priestly company is composed of men “purchased from the earth” (agorazō), which translates the same Greek verb rendered “purchased” in chapter 5 – “You are worthy to take the book and to open its seals because you purchased [agorazō] us for God by your blood out of every kindred, and tongue, and people, and nation.” Standing on “Mount Zion” with the “Lamb” is that very same group that was purchased from every nation by his lifeblood.

Agorazō is from the Greek noun for the marketplace, the agōra. There is a deliberate contrast with the activities of the “false prophet” that excluded anyone who refused to venerate the “beast” from economic activity – (“That no man might buy [agorazō] or sell, except he that had the mark”). However, the “beast” has no authority to prohibit the “Lamb” from “purchasing” whomever he pleases, which counts far more than any economic sanctions imposed by the “beast.”

The 144,000 “males” are ritually pure (“They were not defiled with women”), in contrast to the Nicolaitans and the “teaching of Balaam” that taught Israel “to eat things sacrificed to idols, and to commit fornication.” They are called “males” because they are “priests of God” – (Revelation 2:14, Numbers 25:1-4).

The priestly company follows “the Lamb wherever he goes.” His disciples follow the same self-sacrificial path that he did. It is the “army” sent into battle in response to the question raised in Chapter 13 – “Who can make war with the beast?” Its “soldiers” refused to “render homage” to the “beast,” and therefore, they are well-equipped to wage war with it. However, they “overcome the Dragon” and his vassals in the same paradoxical manner as Jesus – through faithful witness, suffering, and even martyrdom.

5 thoughts on “PRIESTLY COMPANY ON ZION”