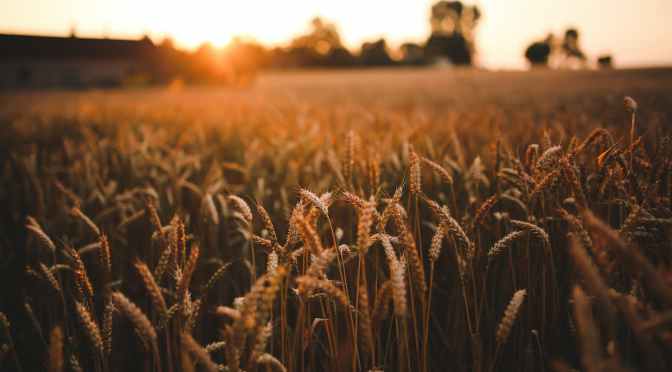 SYNOPSIS – Two different “harvests” are to occur at the end of the age – The reaping of the “grain,” and the ingathering of the “fruit of the vine” – Revelation 14:12-16.

The book of Revelation continues to contrast two different groups – The men and women who follow the “Lamb,” and those who render obeisance to the “Dragon” – And now, the two very different fates that await each group.

In the vision of the “Beast from the sea,” the “inhabitants of the earth” were arrayed against “those who tabernacle in heaven” – The “saints” that were persecuted by the “Beast.”

Next, three different angels issued warnings to the “inhabitants of the earth” – (“another angel”):

The stage is now set to present the two distinct final harvests – All men and women who follow the “Lamb” will participate in the first one, the “grain” harvest. In contrast, all men and women who render allegiance to the “Dragon” will be reaped like the “clusters of the vine…and cast into the great wine-press of the wrath of God.”
Summons to Faithfulness

(Revelation 14:12-13) – “Here, is the endurance of the saints,—they who keep the commandments of God and the faith of Jesus. And I heard a voice out of heaven, saying—Write! Happy, the dead who, in the Lord, do die from henceforth. Yea! (saith the Spirit) that they may rest from their toils, for their works do follow with them.” – (The Emphasized Bible).

“Here is the endurance of the saints.” This clause links this section to the previous chapter in which the “Beast from the sea” was authorized to make “war” against the “saints.” Note well the verbal link – “The endurance and the faith of the saints”:

“They who keep the commandments of God and the faith of Jesus.” The next clause links the passage to the vision of the “Dragon” and his “war” against the “seed of the Woman,” identified as “them who were keeping the commandments of God, and holding the witness of Jesus.” This connection also confirms the identity of the “saints” – All those who follow the Lamb – (Revelation 12:12-17).

“The endurance.” In the Greek clause, “endurance” has a definite article or “the.” It refers not to suffering in general but to something more specific, and in this context, this must refer to persevering through the “war against the saints” waged on behalf of the “Dragon” by the “Beast from the Sea” and its allies – (The “inhabitants of the earth” and the “Beast from the Earth,” the “False Prophet”).

“Happy the dead who, in the Lord do die from henceforth.” Martyrdom for the sake of Jesus is NOT an aberration, rare exception, or defeat; instead, it is an integral part of the “endurance” of the “saints.” This is a conceptual link to the passage that declared the victory of the “saints” over the “Dragon”:

(Revelation 12:10-11) – “And I heard a loud voice in heaven, saying—Now, hath come the salvation, and the power, and the kingdom of our God, and the authority of his Christ; because the accuser of our brethren hath been cast out, who was accusing them before our God day and night; And, they, overcame him by reason of the blood of the Lamb, and by reason of their witnessing word, and they loved not their life, even unto death.” – (The Emphasized Bible).

“For their works do follow with them.” The overcoming “saints” receive “rest” because of their faithfulness, especially in persecution. It would be exceedingly strange if after all that has been said in it, Revelation means by “works” the obedience to the Law of Moses, or to good works in general.

Throughout the letters to the seven churches, the consistent call has been for believers to “overcome,” above all by enduring faithfully through every obstacle that is thrown against them, whether from without by a hostile society or from within by “false apostles” and “false teachers” like the Nicolaitans.

(Revelation 14:14-16) – “And I saw, and lo! a white cloud, and upon the cloud one sitting like unto a son of man, having upon his head a crown of gold, and in his hand a sharp sickle. And another messenger came forth out of the sanctuary, crying out with a loud voice unto him that was sitting upon the cloud—Thrust in thy sickle, and reap; because the hour to reap is come, because the harvest of the earth is ripe. And he that was sitting upon the cloud thrust in his sickle upon the earth; and the earth was reaped.” – (The Emphasized Bible).

“And upon the cloud one sitting like unto a son of man.” This is a verbal link to the first vision of the book when John saw Jesus pictured as a glorious figure arriving on the “clouds.” Note, also, the verbal and conceptual links to the exhortation in the epilogue to the book of Revelation:

“Having upon his head a crown of gold, and in his hand a sharp sickle.” “Crown” translates the Greek noun stephanos, more accurately, a “victor’s wreath.” The stress is not on his royal right to reign but on his overcoming victory achieved through death. This is the same “victor’s wreath” promised to saints who, just like him, also “overcome” even if by an unjust death – (Revelation 1:4-6, 2:10, 3:11, 3:21).

“And another messenger came forth out of the sanctuary, crying out with a loud voice.” Already, three different angels have appeared in this chapter to issue warnings to the “inhabitants of the earth” because of the imminent destruction of “Babylon” (“another angel” – Revelation 14:6-11).

The “cry with a loud voice” by each of the last two angels distinguishes them from the previous three angels who issued warnings to the “inhabitants of the earth.” Likewise, it contrasts their related but differing missions – One, to reap the grain harvest of the earth. The other, to gather in the clusters of the vine, the “wrath of God.”

“Because the hour to reap is come.” This is the same “hour” as the “hour of his judging” announced a few verses earlier by the angel with the “everlasting gospel.” That messenger summoned all who would heed to “fear God and give him glory, because the hour of his judging is come; and do homage unto him that made heaven and the earth and sea and fountains of waters.”The fact that men are called to give honor to God at this late hour demonstrates that the “hour of judging” does not necessarily mean destruction – At least, not for anyone who repents and rejects the “mark of the beast.”

“The hour to reap is come.” The clause alludes to a passage from the judicial pronouncement against ancient Babylon by Jeremiah the prophet, a passage alluded to previously in the second trumpet blast – (“A great mountain burning with fire was cast into the sea” – Revelation 8:8-9, Jeremiah 51:25).

End-time “Babylon” is about to be reaped, “trodden underfoot like a threshing floor.”

(Jeremiah 51:33-35) – “For thus saith Yahweh of hosts, the God of Israel: The daughter of Babylon is like a threshing-floor at the time when it is trodden; yet a little while, and the time of harvest shall come for her. Nebuchadrezzar the king of Babylon hath devoured me, he hath crushed me, he hath made me an empty vessel, he hath, like a monster, swallowed me up, he hath filled his maw with my delicacies; he hath cast me out. The violence done to me and to my flesh be upon Babylon, shall the inhabitant of Zion say; and, My blood be upon the inhabitants of Chaldea, shall Jerusalem say.”

“Babylon” is about to be reaped, “trodden underfoot like a threshing floor.” However, in Revelation, the dreaded “harvest” of pronounced against “Babylon” by Jeremiah is now divided into two distinct “harvests” – The reaping of the ripened grain, and the ingathering of the fruit of the vine to be crushed. The “Son of Man” will gather his saints into the “sanctuary of God” before the “great winepress of the wrath of God is trodden outside the city,” Mystery Babylon, the “great city” – (Revelation 14:17-20).

Most critically, John wants us to hear the echo of a passage from the book of Daniel employed repeatedly by Revelation:

(Daniel 7:13-14, 18) – “I continued looking in the visions of the night, when lo! with the clouds of the heavens, one like a son of man was coming,—and unto the Ancient of days he approached, and before him they brought him near; and unto him were given dominion and dignity and kingship, that all peoples, races and tongues unto him should do service…but the holy ones of the Highest shall receive the kingdom,—and shall possess the kingdom for the age, yea for the age of ages” – (The Emphasized Bible).

When the final “hour” arrives, the overcoming saints will receive their reward – “Because their works do follow them.” In contrast, all the “inhabitants of the earth” that take the “mark of the Beast” – “Shall drink of the wine of the wrath of God, which is prepared, unmixed, in the cup of his anger—and he shall be tormented with fire and brimstone.”

This final “hour” is identical to the “hour of trial” from which the Risen Jesus promised to keep the church at Philadelphia:

(Revelation 3:10-12) – “Because you kept my word of endurance, I also will keep you from the hour of trial, which is about to come upon the whole habitable world, to try them that dwell upon the earth. I come quickly: hold fast that which you have that no one may take your crown.  He that overcomes, I will make him a pillar in the sanctuary of my God.”

Rather than suffer loss in that “hour,” the overcoming saint will become a “pillar” in the “sanctuary of God.” It is no coincidence that the angel who cries out to the “Son of Man” sitting on the “white cloud” is described as “coming forth out of the sanctuary.”

In the next paragraph, the harvest of “grapes” will be gathered into the “winepress of the wrath of God” where the fruit of the vine is pressed until it produces a horrific “vintage.” In the present paragraph, nothing is stated about what happens to the grain harvest or where it goes after being “reaped from the earth.” John wants us to see the verbal links and make the inference – The “grain” harvest is taken to a “storehouse,” the “sanctuary of God” from which the angel came.

The final “hour,” the time of judgment occurs elsewhere in the book of Revelation:

The everlasting gospel has been announced – Men must either “fear God and worship him,” or render homage to the Dragon by “taking the mark of the Beast.” All men and women who render allegiance to God will partake of the grain harvest. In contrast, all others will participate in another and quite horrific “ingathering.” Although one “everlasting gospel” has been proclaimed, it produces two very different harvests.

2 thoughts on “The Final Grain Harvest”