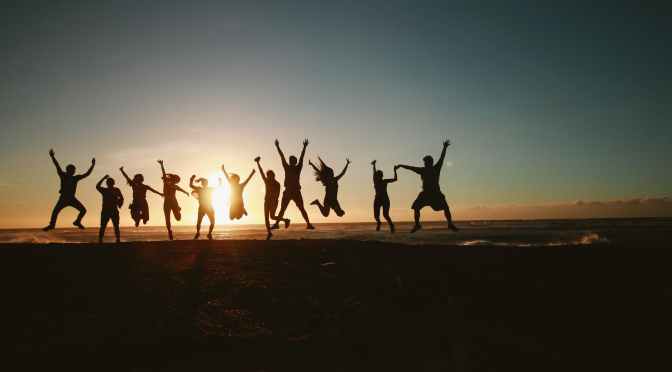 SYNOPSIS – The heavenly celebration of the “wedding” of the “Lamb” follows the destruction of the “Great Harlot” – Revelation 19:1-10.

Next, the book of Revelation presents a heavenly celebration over the final demise of the “Great City, Babylon.” A “great voice” of many people rings out in praise of God because He has judged the “Great Whore” that seduced the “nations” and persecuted the “saints” – The “servants” of God.

(Revelation 19:1-4) – “And after these things I heard a great voice of much people in heaven, saying, Alleluia; Salvation, and glory, and honour, and power unto the Lord our God: For true and righteous are his judgments: for he hath judged the great whore, which did corrupt the earth with her fornication, and hath avenged the blood of his servants at her hand. And, again, they said, Alleluia. And her smoke rose up for ever and ever. And the four and twenty elders and the four beasts fell down and worshipped God that sat on the throne, saying, Amen; Alleluia” – (The  Emphasized Bible).

“A great voice of a great multitude in heaven.” “Multitude” translates the Greek noun oxlos. The phrase is parallel to the description of the “innumerable multitude” that John saw coming out of the “great tribulation” to stand before the Lamb and the Throne in the New Creation – (Revelation 7:15-17, 21:3-4, 22:1-5).

In verse 4, the “four living creatures” and the “twenty-four elders” join the worship celebration. Previously, in Chapter 5, a great myriad of voices that included angels and all creation had proclaimed the Lamb worthy.

Most relevant, the “voice of a great multitude in heaven” is a verbal link to the seventh trumpet when, after the seventh angel had sounded his trumpet – “There followed great voices in heaven, and they said, The kingdom of the world is become the kingdom of our Lord, and of his Christ.” The same endpoint is now reached with the destruction of end-time “Babylon” – (Revelation 11:15-19).

“For true and righteous are his judgments.” The same characteristics were attributed to the judgments of God in the “seven bowls of wrath.” The verbal parallel is deliberate and links the victory over “Babylon” to the “seven bowls that completed the wrath of God”:

The “Great Whore…corrupted the earth with her fornication, and He has avenged the blood of his servants at her hand.” The language recalls the condemnation of “Jezebel” and her deceitful activities at the Church in Thyatira – Already, “Babylon” was working within the churches of Asia. The victims of the “Whore” and the beneficiaries of her downfall include the first-century churches of Asia:

(Revelation 2:20) – “But I have this against thee, that you tolerated the woman Jezebel, who calls herself a prophetess; and she teaches and seduces my servants to commit fornication, and to eat things sacrificed to idols.”

“And her smoke ascended for ever and ever.” This alludes to a prophecy in the book of Isaiahwhere Edom, representing the “nations of the earth,” was condemned by Yahweh to become “burning pitch”:

(Isaiah 34:1-10) – “Come near ye nations to hear, And ye races attend, — Let the earth hear and the fulness thereof, The world and all things produced therefrom: That Yahweh hath wrath against all the nations, and indignation against all their host…For a day of avenging, hath Yahweh, — A year of requitals for the quarrel of Zion. Then shall the torrents thereof be turned into pitch, And the dust thereof into brimstone, — So shall her land become burning pitch: Neither night nor day shall it be quenched, to times everlasting shall ascend the smoke thereof” – (The Emphasized Bible).

Marriage of the Lamb

(Revelation 19:5-9) – “And a voice from the throne came forth, saying — Be giving praise unto our God, all ye his servants, ye that revere him, the small and the great. And I heard as a voice of a great multitude, and as a voice of many waters, and as a voice of mighty thunders, saying — Hallelujah! Because the Lord, [our] God, the Almighty, hath become king. Let us rejoice and exult, and give glory unto him, because the marriage of the Lamb is come and his wife hath made herself ready; and it hath been given unto her that she should be arrayed in fine linen, bright, pure, for the fine linen is the righteous acts of the saints. And he saith unto me — Write! Happy, they who unto the marriage supper of the Lamb have been bidden! And he saith unto me — These words are true [words] of God” – (The Emphasized Bible).

“A voice from the throne.” This is the voice heard previously when the seventh bowl of wrath was poured out on “Babylon…And the seventh angel poured out his vial into the air; and there came a great voice out of the temple of heaven, from the throne, saying, It is done.” It is appropriate for the same voice to praise God for the destruction of Babylon, the “great city” – (Revelation 16:17-21).

“A voice of many waters, and as a voice of mighty thunders.” This same description was given to the one “like a Son of Man” in the first vision of John while on the isle of Patmos, the one whose “feet were like fine brass…and his voice as the sound of many waters” – (Revelation 1:15).

The “voice” or the “sound like mighty thunders” recalls the refrain first heard before the Throne at the center of the Cosmos in Chapter 4, then heard again at the end of the series of the “seven seals,” the “seven trumpets,” and the “seven bowls of wrath” – The “flashes of lightning, claps of thunder, and voices.” Thus, the judgment of “Babylon” in Chapter 19 coincides chronologically with the conclusions of each of the sevenfold series – (Revelation 4:5, 8:5, 11:19, 16:18).

“Because the Lord, [our] God, the Almighty, has become king.” This statement links this celebration to the conclusion of the seventh trumpet where the kingdoms of the earth became the kingdom of God:

(Revelation 11:15-19) – “And the seventh angel sounded; and there followed great voices in heaven, and they said, The kingdom of the world is become the kingdom of our Lord, and of his Christ: and he shall reign for ever and ever. And the four and twenty elders, who sit before God on their thrones, fell upon their faces and worshipped God…and there followed lightnings, and voices, and thunders, and an earthquake, and great hail.”

“The marriage of the Lamb, is come, and his wife hath made herself ready.” This is the first mention of the marriage of the “Lamb.” Very likely, behind this image are passages from the book of Isaiah that pictured Zion as the bride of Yahweh – (e.g., Isaiah 62:1-5, Isaiah 66:1-5).

In Chapter 21, the “holy city, New Jerusalem” is seen descending from heaven to the earth – “Prepared as a bride adorned for her husband.” Presumably, if the “marriage” is to take place here then the narrative has reached the same point in time as the vision of Chapter 21 or, at least, it anticipates it – (Revelation 21:2).

The “wife” of the “Lamb” is a female figure used to contrast New Jerusalem, the “holy city,” to “Babylon, the Great Whore” – “She should be arrayed in fine linen, bright, pure, for the fine linen is the righteous acts of the saints.” This is a deliberate comparison with the “Great Whore” that John saw “arrayed in purple and scarlet, and decked with gold and precious stones and pearls, having a golden cup in her hand full of abominations and filthiness of her fornication” – (Revelation 17:4).

The description of the “wife of the Lamb” parallels the promises made to overcomers in the letters to the churches of Asia. Also, it recalls the “clothing” worn by the members of the innumerable multitude that came out of the “great tribulation.” Note the following parallels:

(Revelation 19:10) – “And I fell down at his feet to do him homage; and he saith unto me — See! [thou do it] not! A fellow-servant am I of thee and of thy brethren who have the witness of Jesus: unto God do homage! For the witness of Jesus is the spirit of the prophecy” – (The Emphasized Bible).

This reaction of John is to render homage to the interpreting angel. Perhaps he was overwhelmed by his visionary experience or the glory of the angel. This act parallels his reaction at the end of his visions in the epilogue of the book:

(Revelation 22:8-9) – “And I John saw these things and heard them. And when I had heard and seen, I fell down to worship before the feet of the angel which shewed me these things. Then saith he unto me, See thou do it not: for I am thy fellow-servant, and of thy brethren the prophets, and of them which keep the sayings of this book: worship God.”

The Greek verb used means to “render homage.” It is not necessarily the same act as the worship of a deity in any religious sense. It could refer to rendering homage or allegiance to a person of higher rank – (proskuneo; e.g., Revelation 3:9).

But the controversy in Revelation is over whether one “renders homage” to the “Dragon” or to God. The present incident reinforces the idea that allegiance belongs to God and the Lamb, period. The Greek verb used is the same one found elsewhere for “rendering homage” to the “Beast” – (Revelation 13:4-15).

“The testimony of Jesus is the spirit of prophecy.” This repeats a theme found elsewhere in the book. By “testimony” is meant more than a book or a believer sharing the gospel. To bear the “testimony of Jesus” is to risk all by following in his footsteps, and the ultimate “witness” for him is martyrdom.

“Blessed are they who unto the marriage supper of the Lamb are bidden! And he saith unto me — These words are true [words] of God.” This is conceptually parallel to the great blessedness to find one’s name “written in the Lamb’s book of life.”

One thought on “HEAVENLY CELEBRATION”