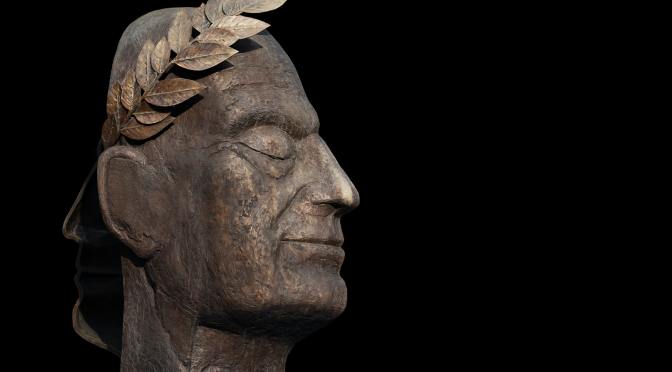 Paul instructed believers living in the center of the Empire not to oppose the government – its existence had been “arranged” by God – Romans 13:1-8.

Writing to the churches in Rome, Paul presented principles for Christian conduct towards the State. Believers to “subordinate themselves to governing powers: for there is no authority except by God,” a statement written at the time when Nero ruled the empire, the very man who became the first emperor to persecute Christians.

What is truly exceptional is the call for disciples to show due respect and submission to “governing authorities” to an imperial system that was anything but democratic, one ruled by an emperor who held absolute power.

And at the time, the empire was ruled by Nero, one of the most infamous of Rome’s emperors. Yet despite the despotic nature of that regime, Paul summoned believers to accord it and its leaders respect and honor.

The existing powers have been “arranged” by God. This translates the Greek verb tassō, meaning to “order, arrange, set, appoint” (Strong’s – #G5021). In other words, governing authorities exist at the “arrangement” of God, whether we understand His reasons for the present order or not.

In principle, his teaching was not new. Paul built his argument on Old Testament precedents, especially on passages from Daniel. Near the start of the Babylonian Captivity, Daniel declared that God rules over the affairs of the nations – “He removes kings and sets up kings… He rules in the kingdom of men, and gives it to whomever he pleases, and sets up over it even the basest of men” – (Daniel 2:21, 4:17).

And because God has “arranged” the existing authorities, to “resist” them is tantamount to opposing the “arrangement of God.” For if He does give political authority to whomever He pleases, to resist it means trespassing upon His prerogative and sovereignty.

Over the centuries, many church leaders have argued that tyranny, corruption, and incompetence in a government constitute exceptions to Paul’s rule. In such circumstances, Christian support for political and even violent revolution becomes necessary, even justified. But that is an argument of expedience, not principle, a form of the “end justifies the means.” Moreover, it ignores the historical context of the Roman house churches.

First, Paul said nothing about exceptions to the rule. Justifying insurrection and resistance based on the government’s repressive policies or corruption is a loophole read into the text.

Second, Paul wrote to Christians living under a pagan, authoritarian regime. The Roman Empire was anything but democratic or just. Its emperor held absolute power. And the Roman government was notoriously corrupt and brutal.

Third, at the time Paul wrote, Nero was Caesar, a man so depraved that even by Roman standards he was beyond the pale. Among other things, he murdered his half-brother and mother. In a fit of rage, he kicked his pregnant wife to death. Needing a scapegoat for the fires that burned much of the city (A.D. 64), Nero blamed the conflagration on Christians, thereby becoming the first emperor to persecute believers. And quite possibly, Paul himself was executed in the ‘Neronian Persecution,’ the very same apostle who ordered Christians not to resist the autocratic Roman State.

Considering New Testament principles and its apocalyptic perspective, the teaching of Paul makes perfect sense. The disciple of Jesus is called to give his total allegiance to Jesus and his Kingdom, a political requirement that transcends all national, ethnic, social, cultural, economic, and linguistic loyalties – (Galatians 3:28, Revelation 5:9-12, 7:9-17).

His disciple is a citizen of a realm that has no concept of “dual citizenship.” Loyalty to Jesus must supersede all other allegiances, regardless of the demands and expectations of family, employer, society, or the State. Moreover, he tasked his church with proclaiming the gospel of the “kingdom of God” to ALL nations, to summon all men to enter his domain, and to render absolute allegiance to its king.

The only “revolution” that matters, and the only one that can produce peace, hope, and life, is the kingdom of God on the earth. The day is coming when His rule will replace ALL existing governments, and that day will coincide with the “arrival” of Jesus in glory. That biblical declaration alone tells us that no government in existence today will endure forever – (1 Corinthians 15:20-28).

In the interim, Christians are called to bear faithful witness to that political reality while living in a fallen world and under very imperfect governments. But to work for change in the corrupt institutions of this age is to work for the “meat that perishes.” And since the death and resurrection of Christ, the institutions and “forms of this age have been in the process of passing away” – (1 Corinthians 7:31).

The exhortation to obey even a despotic state like Rome, one that attempted to annihilate the Church, executed Jesus, and murdered Paul, ought to give us pause before immersing ourselves in the political process, let alone advocating rebellion against existing authorities. Any calls for Christians to disobey an unpopular government or officeholder must be rebuffed, if for no other reason because Scripture requires it.

Certainly, Paul was not naïve about the nature of the State, and he certainly did not have an idealistic view of Rome. He had experienced pressure, resistance, and persecution at the hands of Roman magistrates, among others.

Christians are not to disengage from the world, but instead, to engage it with the biblical means – faith, prayer, gospel witness, acts of mercy, and above all, by emulating the self-sacrificial service of Jesus for others, especially to the weak and the marginalized members of society.

We are NOT called to live lives conformed to the ideologies and values of this age. Yes, very often the State is unjust, even brutal, which is precisely the point. Disciples of Jesus ought not to do evil so some greater “good may come” – (Romans 12:1-2).

The Cross of Christ is incompatible with any program or ideology that calls for revolution, violence, or extra-legal activities against the State. His disciples are summoned to emulate him, and they are called to something far higher than the political systems of this age, all of which are destined to disappear from the earth.