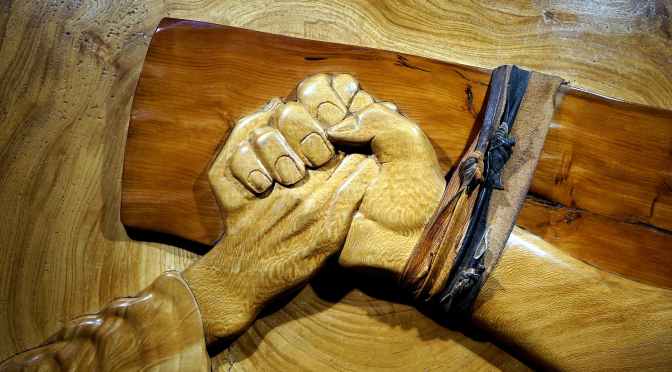 Disciples reign with Jesus as “priests” who render service in his Tabernacle by mediating his light in the world.

In Revelation, the present sovereignty of Jesus is based on his past death and resurrection, and because of his sacrificial death, his disciples now reign with him. But like him, their elevation to rule over the earth is paradoxical – it is characterized by self-sacrificial service, for the outpouring of his lifeblood has consecrated them as “priests” for God.

Priestly service IS what it means to reign with Christ, and this call echoes the original mission to which Yahweh summoned Israel at Mount Sinai – “You will be for me a kingdom of priests, and a holy nation” – (Exodus 19:6).

In the Greek text of the preceding passage, “kingdom” is set in apposition to “priests,” that is, the latter term defines the former. This is a priestly kingdom, therefore, its members execute their royal duties AS “priests.” There is one group in view, not two; “priestly kings,” not “priests” and “kings.”

In the opening vision, Jesus is depicted as the glorious “Son of Man,” a priestly figure who serves in the sanctuary and stands among “seven golden lampstands,” a reflection of the ancient Tabernacle in the wilderness that featured a seven-branched lampstand. And here, he is clothed with the full-length linen robe of the high priest that is held together by a “golden girdle.”

In this sanctuary, Jesus tends the seven “lampstands,” trimming their wicks and replenishing oil as needed. And the “golden lampstands” represent the “seven churches of Asia” that he oversees from the heavenly Tabernacle – (Revelation 1:12-20).

To the saint who “overcomes,” this same Son of Man promises to “grant him to sit down with me in my throne, just as I also overcame and sat down with my Father in his throne.” But to rise to such a high honor, his disciple must “overcome” in the same manner that he did; that is, just as he became the “faithful witness” who loved us and “loosed us from our sins by his blood.” Saints do not attain regal status by conquering their persecutors or enslaving other men, but by overcoming sin, Satan, persevering through tribulations and bearing faithful testimony to the larger world – (Revelation 3:21).

In the vision of the throne at the center of the universe, only the “slain Lamb” was found “worthy” to open the “sealed scroll.” Though he was the “lion of the tribe of Judah,” the Messiah destined to “rule the nations of the earth with a rod of iron,” he fulfills that role as the sacrificial “Lamb.” This understanding is confirmed by the myriad of voices raised in praise of him:

Once again, the call of ancient Israel is applied to the people redeemed by the “Lamb,” the men and women redeemed by his lifeblood have been constituted a “kingdom and priests,” and therefore, “they are reigning on the earth.” And as priestly kings, they bear testimony and mediate his light on the earth.

Later, in the vision of the “innumerable multitude,” John saw men and women “clothed in white robes” coming out of the “Great Tribulation” who had washed their robes and made them white “in the blood of the Lamb.” They were standing before the “Lamb” and throne of God in the sanctuary, and “He that sits on the throne shall spread his tabernacle over them.” The “white robes” worn by the saints parallel the garments worn by Aaron and his sons when they were installed as priests. Thus, once more, overcoming saints are pictured as priests at worship in the Tabernacle – (Leviticus 8:6-7, Revelation 7:9-17).

And this priestly is “rendering divine service” before the Throne. This translates the Greek verb latreuô, the same verb applied to the service of the Levitical priests in the ancient Greek version of Leviticus, the Septuagint. And here, present-tense verbs are used, “they ARE SERVING him day and night” in the sanctuary.

The priestly role of the saints becomes clearer when John “measured” the “sanctuary,” the “altar,” and “those who were rendering divine service” in it (latreuô), that is, the priests conducting their duties before the “altar.” After he “measured” the “sanctuary,” the entire “holy city” was handed over to the nations and “trampled underfoot forty-two months” – (Revelation 11:1-2).

This same reality is found in the vision of the “beast ascending from the sea.” The “beast” was given a “mouth speaking great things” with which it “slandered the tabernacle, those that dwell in the heaven.” In the Greek clause, there is no conjunction between “tabernacle” and “they who tabernacle.” The two terms are in apposition and the latter defines the former. This is confirmed by the next verse that interprets the image – “it was given to it to make war with the saints, and to overcome them.” The “beast” wages war on the priestly company that is “rendering divine service” (latreuô) to the “Lamb.” This is in deliberate contrast to the “inhabitants of the earth” that “render homage” (proskeneô) to the “beast” – (Revelation 13:4-7).

The “kingdom of priests” is presented once more at the start of the “thousand years.” After Satan was bound in the “Abyss,” judgment was given for the martyrs who had died for the “testimony of Jesus and the word of God, and such as did not render homage to the beast.” They “lived and reigned with Christ a thousand years… Over these, the second death has no power, but they will be priests of God and of Christ, and reign with him a thousand years” – (Revelation 20:1-6).

Of relevance in this final vision is that overcoming saints qualified to reign with Jesus as his “priests” because they willingly gave their lives in service to him.

In the book of Revelation, Jesus is a priestly figure. His sacrifice redeemed men and women to God, and he now reigns as their high priest. In turn, his lifeblood consecrated his saints as “priests” who now reign with him. And they are summoned to reign in the precise same manner that he does.

The “priests of God” overcome their enemies by the “blood of the Lamb, the word of their testimony, and because they love not their life unto death” – through self-sacrificial service on behalf of their high priest, the “Lamb,” who summons them to reign with him on the earth, especially through their faithful testimony.