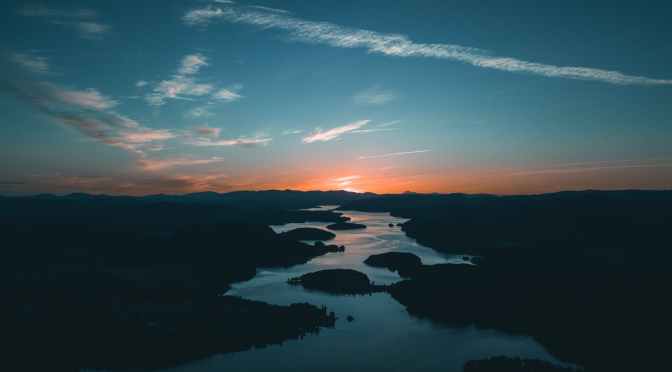 In the ministry of Jesus, the kingdom of God arrived as announced by John the Baptist – Mark 1:1-3.

The gospel of Mark begins with a declaration from the Hebrew Bible that sets the stage for the messianic mission of Jesus Christ. Thus, it opens on a distinct note of fulfillment. Jesus is the promised Messiah of Israel, and with the appearance of John, the long-awaited “season of fulfillment” has begun.

“Beginning” is the first word in the passage, and its position in the Greek sentence makes it emphatic. The ministry of John marked the beginning of the “good news” about the kingdom of God.

Other New Testament passages also link the “beginning” of the gospel to John, the one who “prepared” the way for the messianic king. And the term is a deliberate echo of the creation story in the book of Genesis:

The life, death, and resurrection of Jesus inaugurated the New Creation and began the redemption of humanity. His arrival on the banks of the Jordan River carried universal implications far beyond the hopes of the Jewish nation; thus, for all humanity, it truly was “good news” – (Romans 8:20-23, Revelation 3:14).

The Greek term rendered “gospel” or euangelion means “good news, glad tidings.” It is a compound of the prefix eu (“good”) and angelion (“message”).  English words derived from it include “angel” and “evangelist.” In the New Testament, its usage is based in part on prophecies from Isaiah. For example:

And this “good news of Jesus” concerned the imminent arrival of the long-promised salvation and the reign of God in the person of His Son. The genitive construction of the clause means either Jesus is the content or the herald of the good news, or both.

“Christ” is not his last name but the designation of what he is, the “anointed one,” the Messiah of Israel. And in the Hebrew Bible, two categories of men are “anointed,” priests and kings, and their anointing is performed by pouring olive oil on the head of the designated man. This act sets him apart for a specific office or task – (Leviticus 21:10-12, Psalm 89:20).

“Jesus” is the anglicized spelling of the Hebrew name Yeshua or Yehoshua, the latter better known to English readers as “Joshua.” Moses prefixed the syllable Yah to the original name of Hoshea (“salvation”) to form the compound name Ye-hoshua, and it means “Yahweh saves,” or “salvation of Yahweh” – (Numbers 13:16, Deuteronomy 32:44).

“Son of God” among first-century Jews had messianic and royal connotations. It was part of the promise of kingship made to David who became God’s “son” when he was installed on the throne of Israel. The Messiah would inherit his throne and rule the “nations” from Mount Zion – (2 Samuel 7:14, Psalm 2:6-9, Hebrews 1:5-14).

“As written in Isaiah.” The prophecy cited is a composite of verses from the books of Exodus, Isaiah, and Malachi, although the bulk of the text is from Isaiah:

The quotation from Exodus originally referred to the promise to keep Israel safe in the “wilderness,” and to lead her to the Promised Land.

Thus, Jesus is the true Israel poised to traverse the “wilderness” and lead his people to possess the kingdom.

Mark has threaded other themes from the history of Israel into his account. But the ministry of the Messiah was far more than a replay of that ancient story, or an attempt by Jesus to succeed where Israel had failed.

Instead, in the life, death, and resurrection of Jesus the plan of God to redeem humanity and His Creation from bondage to sin, Satan, and death has commenced. His arrival marked the dawn of the new and final era in salvation history, and nothing would ever be the same again.

There is coming a final gathering when the saints will be assembled before Jesus in glory, but the wicked will be collected and cast from his presence.

“Evil men and howling impostors will wax worse and worse, deceiving and being deceived.”